As every Rembrandt scholar knows, the artist wasn’t born in Amsterdam; the city that has that honour is Leiden, a city home to a famous university, and a city twinned with Oxford, home to the oldest university in the world. When Rembrandt was born, the walled medieval town had a population of nearly 17,000 living in 5,000 houses.[1] But by 1625- the start of Rembrandt’s artistic career- there were 45,000 Leideners- four times as many as before- living in not quite 7,000 houses.[2] This made it the second greatest city after Amsterdam; but that city which had usurped Antwerp’s place as the trading centre of the North, was to provide his first real master- Pieter Lastman from whom the young artist learned to do crowd scenes, mythologies, dramatic representations of events in history. For example, compare Lastman's Triumph of Mordecai with Rembrandt's wonderful etching of the same subject; the pupil's work is superior in every way. Some scholars have even noted the compositional link with the Nightwatch, especially the arch in the background which looms over all. Rembrandt’s etching suggests that he may have found stimulating subject matter in the streets of Amsterdam itself just as much as Lastman’s vast historical panoramas: there is a mother with a child on her back, two dogs squaring up to each other, and vignettes of daily life. For the young artist, Amsterdam held many fascinations: it was a cosmopolitan city, inherently tolerant, and imbued with a spirit of capitalist enterprise.  We are reminded of the French philosopher Rene Descartes, a famous exile in Amsterdam, who remarked that “…in this vast city, where I am the only man not engaged in trade, everyone is actively occupied in money-making, that I might spend my whole life in complete solitude.”[3] Maybe the young Rembrandt sought solitude in the heart of the metropolis where he would have passed his time observing the mercantile activity on the Sint Anthonisbreestraat, where he dwelt with the dealer Hendrik Uylenburg; it was here that Rembrandt probably observed his first Jews in Amsterdam, possibly wealthy Sephardim merchants from Portugal and Spain.[4] Later, Rembrandt would boast of the same kind of wealth, but without the business acumen. This can be seen in his disastrous decision to purchase in 1639 a large house on the Sint Anthonisbreestraat; this would hasten his financial downfall which would culminate in the ignominious bankruptcy of 1660.[5] However it would be wrong to blame Rembrandt’s financial calamities on an interest in alchemy inspired by Jews in Amsterdam, the view of a nineteenth-century English connoisseur.[6]

For those wishing to learn about Rembrandt’s workshop, the catalogue that accompanied the exhibition Rembrandt: The Master and his Workshop, provides one of the best routes into the subject.[7] Information about seventeenth-century workshops is patchy and accounts are sparse, though certainly more extant than in the renaissance. Some clues are provided by images of artist in their studios, especially in the Netherlands.[8] Here, where matter-of-fact realism conditioned life, we see the artist’s studio becoming more recognisable as a real space. Rembrandt is no exception to this trend. In an early painting (about 1628) in Boston, we see the young artist dressed in absurdly large clothes staring intently at a canvas he has either painted, or is contemplating before starting.[9] Behind the young painter are jars containing pigment and oil for binding; on the wall hangs a palette that he may eventually use, assuming that he has not started painting. This painting is also a self-portrait, and it was via this genre that the artist’s studio became more visible, both explicitly and by implication. In a later self-portrait at Kenwood House Rembrandt shows himself before an easel which we assume was in his own studio.[10] This may be true, but the studio is also “present” as an abstraction: the circles on the easel probably refer to the theory behind the practical side of painting.  Compare other painters like Pieter Claes who turns the self-portrait in the studio upside down by showing it inside a sphere that he is actually painting. Escher couldn't have done better.

How did Rembrandt teach his pupils in his Amsterdam studio? There is virtually no written evidence; as for drawings showing the Master instructing, these may be artists’ impressions of how Rembrandt taught, not his actual teaching practice at all.[11] In the seventeenth-century workshop learning could take many different forms. A pupil could be given the task of copying the artist’s work, trying to reproduce their style, and the master would subsequently evaluate it, correcting it where necessary, as in this fascinating example said to be by Rembrandt’s pupil Constantijn van Renesse with corrections by the master. Assuming the identification is correct, we note how the master has imposed his terribilità on the pupil’s (Constantin van Renesse) tentative Annunciation; Rembrandt’s angel has a grandeur that the puny original couldn’t hope to match. And note that in the drawing in the previous section, Rembrandt is shown amongst his pupils- this is a hands-on situation. The nude shown in the drawing of Rembrandt's studio is female and Rembrandt was no stranger to female flesh, but he had his own ideas about how the female form should be drawn. His nudes are not slim, super-model style, but quite the opposite which led Kenneth Clark to comment on their obesity. This can be seen in the so-called Cleopatra, drawn fluently in red chalk Though it is erotic in the tradition of his predecessors like Rubens and Titian, the nude is not idealised which is typical of Rembrandt’s approach to painting the nude generally. His studies of men drawn from the live model could not be further from the classical athletes regularly drawn by artists in Italy.

When Rembrandt stepped out of Uylenburg’s house onto Sint Anthonisbreestraat, a social panorama must have met his eyes. People from all walks of life, wealthy burghers, haggard beggars, jaunty street musicians and bustling Jewish merchants. A number of Rembrandt’s drawings betray his study of the crowds of people, as well as lone individuals to be found in the streets of early modern Amsterdam. Rembrandt’s fluent pen captured a variety of scenes and vignettes which found their way into his compositions such as the so-called “Hundred Guilder Print” or the grisaille of John the Baptist preaching to a vast crowd composed of people of many different faiths including the Jews who sceptically appraise John’s lecture in the centre. This inventive crowd scene should be seen as cosmopolitanism reflecting the Dutch colonial culture of the Republic. A direct link with the Americas is shown by the presence of an Indian behind the Baptist, “a potential new convert to the Gospels from the New World.”[12]  Then there is the Saracen warrior (with lance and spear) who looks out of the picture away from the Baptist. But it was the Jews, especially, to be found in such places as Nieuwe Houtmarkt that mostly attracted Rembrandt’s eye. His famous crowd scenes of Christ Preaching owe much to his study of synagogues and temples which he drew, and which appear in many of his religious paintings. According to Simon Schama, poor Jews were to be found on the Nieuwe Houtmarkt and they were “…dressed strikingly different from Dutch men and women and speaking a gabbling, incomprehensible tongue.”[13] This was probably Yiddish which linguistically differed from the Sephardim who in their turn were virtually indistinguishable from Amsterdam burghers in their manner of dress. For example, Rembrandt’s portrait of the Sephardic doctor Ephraim Bueno may be compared with any number of the artist’s portrayal of his well-heeled Dutch patrons. [14]  Bueno was born in Portugal, educated in medicine at the University of Bordeaux like his father Joseph who was famous for administering to Prince Maurits on his deathbed at the Hague in 1625; the doctor also wrote poetry in Spanish, and was a translator, editor and financial supporter of Menasseh ben Israel’s printing press in Amsterdam.[15] Then there were other Jewish patrons like Bento Osorio, said to be the richest Jewish merchant in Amsterdam at the time; he had a liking for landscape paintings.[16] 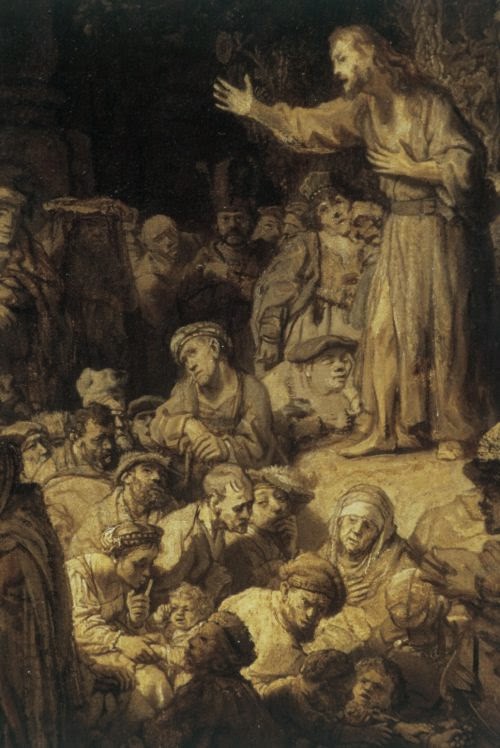 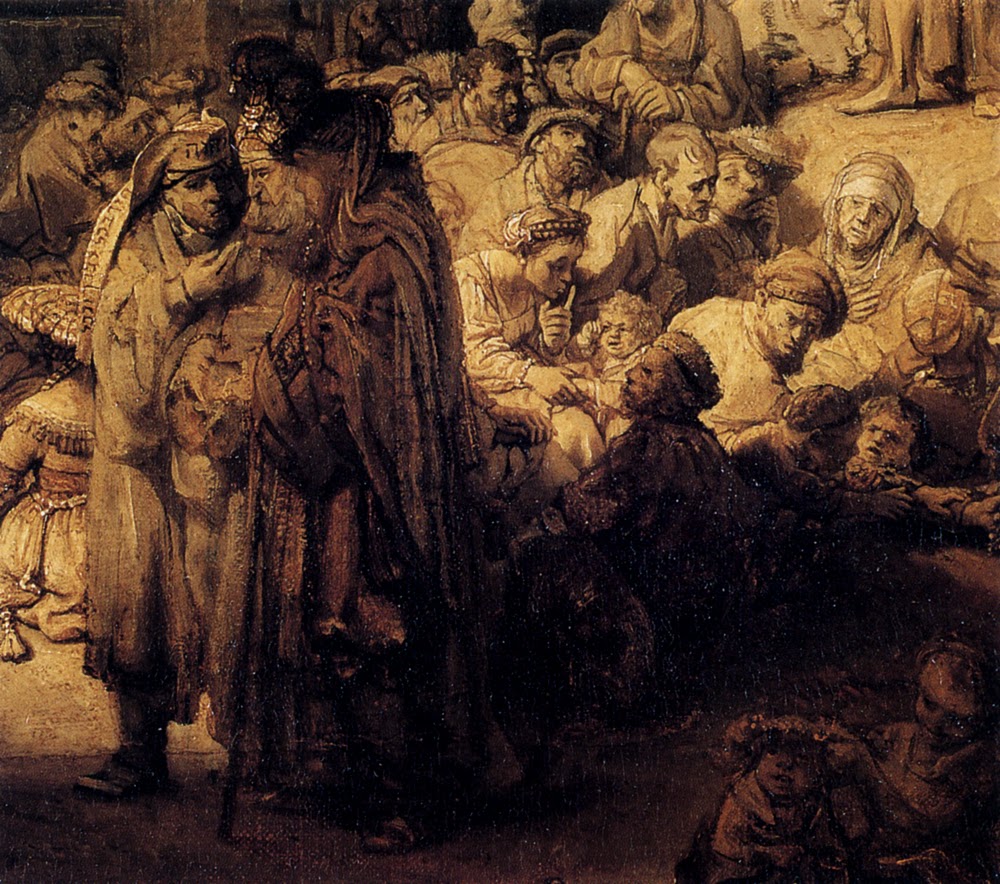 At first sight there doesn’t seem to be any explicit connection between Rembrandt’s creative methods and his portrayals of various faiths and publics in the streets and buildings of Amsterdam. However, a cohort of nineteenth-century scholars including Charles Blanc, Kolloff, Wilhelm von Bode, and Wilhelm Valentiner linked Rembrandt’s ability to extract character from Jewish groups and individuals with his artistic brilliance; at the same time this group of scholars believed that Rembrandt’s interest in Jews stemmed from his religious faith.[17] An important question here is what is the link between Rembrandt’s art practice in the studio and his rendition of various faiths in Amsterdam? In a recent publication Richard Verdi proposed direct connections between Rembrandt’s crowd studies and sketches with their varied attitudes of attentiveness, distraction, and boredom (as in the St John Preaching) and Rembrandt’s interest in speaking to a crowd of students in his studio which Verdi compared to such scenes as “Presentation in the Temple” where the Saviour confronts some Jewish elders.[18] As stated previously, it would be rash to base claims about Rembrandt’s teaching methods on surviving drawings since we do not know if they accurately convey his methods of instructing his students. And the issue of how much Rembrandt’s artistic genius owes to the religious learnedness and preaching culture of Calvinism and Judaism is one that needs more attention than Verdi gives in his volume.[19] It seems feasible however to claim that Rembrandt’s scenes of Christian and Jewish communities as in “Le Petit Tomb” and his etching of a synagogue imply some interaction between the studio and religious gatherings in the spaces of Amsterdam itself.[20] Assuming such an interface exists, it is probably in Rembrandt’s representations of Christ that this link between studio and religion is to be found. It has been frequently noted that Rembrandt’s head studies, or tronies, undated but probably done before 1640-45, closely resemble the head of Christ in the Louvre Supper at Emmaus.[21] Though connections between Rembrandt’s studio and synagogue and church seem valid, it doesn’t explain the artist’s motivations. To end on an inconclusive note: what does the face of Jesus tell us about Rembrandt’s religious views? Why did he paint himself as St Paul?

15)   Rembrandt van Rhyn, A Nude Man Seated, Another Standing, with a Woman And Baby in the Background, c. 1646, etching and drypoint (second stage of three), Amsterdam, The Rijksmuseum.[24]